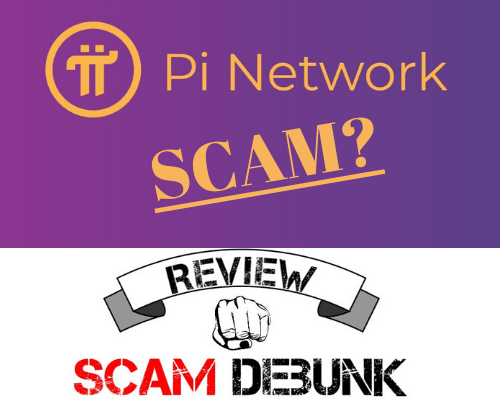 Money makes the world go around. We all are familiar with that phrase. However, we are in the age of new currency: cryptocurrency and this one could take the world, sooner or later.

With all the hype going around it, it is fair to ask: is Pi Network Scam? If you have asked yourself that question, it means you are careful and congratulation on taking the step to investigate it. So, let’s dig in!

What Is Pi Network?

I think it is safe to say that most every person has heard about cryptocurrencies. It doesn’t mean they know much about it, but they hear about Bitcoin for sure.

Since Bitcoin is the father of all cryptocurrencies, all other coins are called altcoins. Pi Network is one of such coins. More general information about Pi Network can be found in my previous post here.

The project was developed by Stanford PHDs: Dr. Nicolas Kokkalis, Dr. Chengdiao Fan, and Vincent McPhillip. While it is still in beta and it was launched on March 14th, 2019 (3.14 is the number of Pi, so the symbolism is obvious), after precisely one year they have over 3.5 million engaged Pioneers, which is outstanding!

At the moment, the balance that Pioneers earn is through the faucet, and once the project enters phase 3, each individual balance will be recorded and honored.

How Does Pi Network Works?

Unlike most cryptocurrencies, Pi Network is different. You may be asking: different in what way? Well, to start, Pi Network has different transaction validations. While the vast majority use PoW (Proof of Work) to validate transactions between users, Pi Network uses SCP (Stellar Consensus Protocol). Main features for SCP are: While PoW use just decentralized control, you can see why SCP is more desirable. Below is a detailed video about how the Stellar Consensus Protocol works: So, you see, instead of burning energy with Proof of Work, you are leveraging your existing social connections, with no financial cost or battery drain. Consensus for the transaction is made through the security circles, which each Pioneer made and vouched to be trustworthy and won’t try to scam or cheat in any way.

The Inside of The App 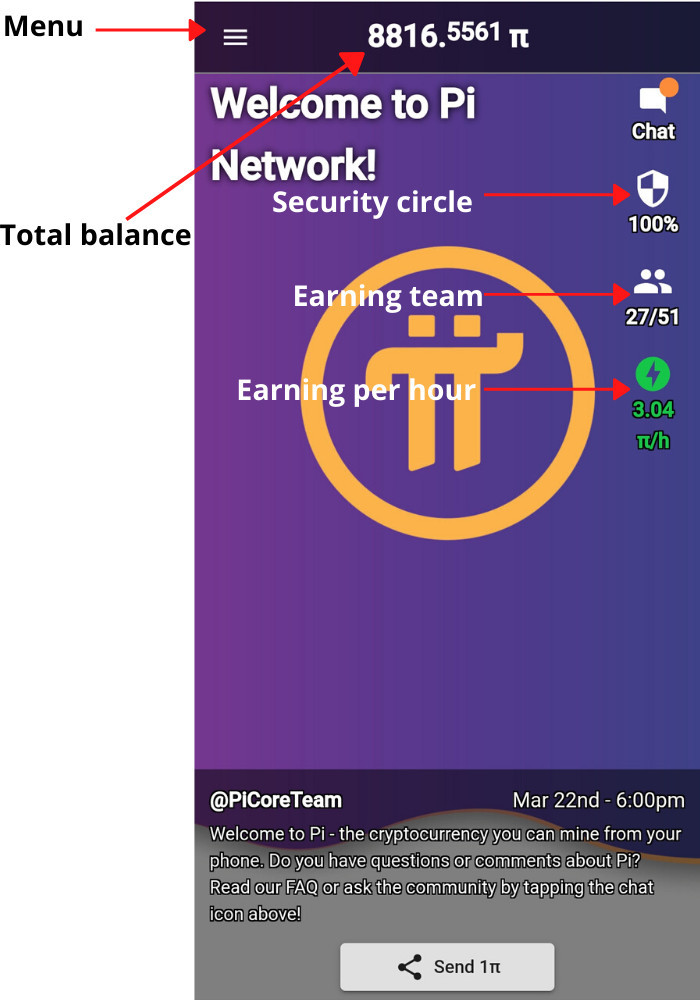 The layout of the application is relatively simple. On the top left there is a menu and on the right all the stuff you need for now.

Every 24 hours is count as one mining cycle. Once the 24 hours pass, you will have to press the green lightning icon in order to continue gathering Pi.

When you successfully finish three mining cycle, you will be able to form your own security circle.

Security circles will be the essence of Pi Network as they will play an essential role in validating any transaction in the future.

It is imperative that you add ONLY people that you trust in your security circle as you will vouch for them that they won’t try to scam the network.

Earning team are your referrals, people that join Pi Network through your invite code. The more people you have active, the higher your earning per hour is.

Although this may seem like a pyramid scheme, it is not. You have benefits only from your referrals, but not from the referrals of your referrals.

All important announcements are shown at the front display, so you will always be up to date with any new features or plans. It is not unusual from the developers (aka Core Team) to post a video explaining what are they working on or planning to do.

There are three phases of this project.

Pi Network launched Phase 1 of the project on 13/4/2019. The first phase lasted precisely one year, and at that time, developers’ goal was to gain 1 million Pioneers.

They exceeded their goals for more than three-time, with a community of 3,5 million engaged Pioneers. This tells that people believe in their project.

The Pi server is emulating the behavior of the decentralized system as it will function once it is live. All coins that you collect during this phase will be migrated to the live net once it launches.

Pi is not listed on exchanges during this phase, and it is impossible to “buy” Pi with any other currency.

Exactly one year after the launch, on March 14th, 2020, Pi Network project entered in Phase 2. Before launching the mainnet, the Node software will be deployed to the testnet.

The testnet will use the same exact trust graph as the mainnet but on a testing server.

The test net will be run in parallel to the Pi emulator in phase one, and periodically, the results from both systems will be compared to catch the gaps and misses of the test net, which will allow Pi developers to propose and implement fixes.

After some time, the testnet will reach a point where its results will match the emulators. At that time, when the community feels its ready, Pi will migrate to the next and final phase.

When the community feels the software is ready for production, and it has been thoroughly tested on the testnet, the official mainnet of the Pi network will be launched.

An important detail is that, in the transition into the mainnet, only accounts validated to belong to distinct real individuals will be honored, which means, only accounts that are verified (phone or Facebook verification), and accounts that have completed KYC.

After this point, the faucet and Pi network emulator of Phase 1 will be shut down, and the system will continue on its own forever. Future updates to the protocol and deployment will depend on nodes updating the mining software just like any other blockchain.

No central authority will be controlling the currency, and it will be fully decentralized. The balances of fake users or duplicate users will be discarded. This is the phase when Pi can be connected to exchanges and be exchanged for other currencies.

The Purpose And Vision 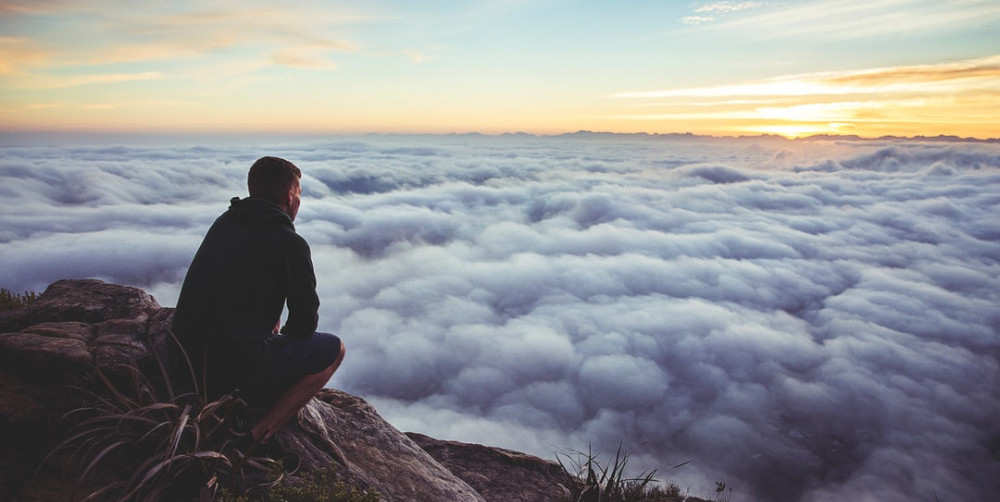 Already a few hundred people are chosen to participate in the pilot project of sending Pi to each other. There are even a couple of marketplaces where you can buy products or services for Pi.

Pilot participants have already bought many different things with Pi, including parts for the truck (Axle, CV Joints, and Tires), jars of honey, baby clothes, a bottle of wine, PS4 controller, blender, etc…

Since the project is in Phase 2, exciting times are ahead. Soon, Nodes will start, and implementing other applications to spend Pi will be implanted in the Pi Network.

With such vision and with people believing in the project, our hopes for this project are high.

People have a lot of questions once they come across Pi Network for the first time. Most of the information and answers can be found in the FAQ of the application, but most common questions are:

Pi Network definitely is attractive. A large community is only growing each day. Even though developers can’t guarantee its success, my hope for this project is high!

You can join Pi Network by downloading the app. I will be honored if you choose me as the person who referred you. That way, both you and I will have a higher faucet rate of 25%. Be sure to input my name when asked: Verzus.

Hey there and welcome! My name is Dalibor and I have started this site to help you avoid online scams. All they want is your money, and I can not hate more fact that they are ready for anything to pursue you to give them your hard earned money! My aim here is to help you not to fall for that and teach you how really you can make money online.
PrevPreviousIs The Bitcoin Capital Legit Auto Trader?
NextIs Monelo Scam? My Honest ReviewNext