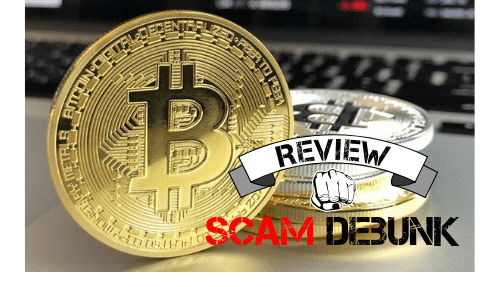 Bitcoin Abuse – You Have Been Hacked

There is no worse thing than extortion and blackmail. And when an accusation is false and unjustified, it makes it even worse! When you become a victim to such an ugly situation, you can only ask yourself: how low can people fall?

In this article, I will get you familiar with one type of suck thing, which I encounter myself as well. Bitcoin abuse has been widespread among scammers, and I will teach you what to look out for if you encounter it.

Blackmail is the crime involving a threat for purposes of compelling a person to do an act against his or her will, or for purposes of taking the person’s money or property. It is punishable by fine, jail, or both.

If you encounter such, important thing is to remember: never take action in your own hands. If you decide to deal with it yourself, it could only lead to even worse things.

Finding and punishing these people is what the police are for. Call them first. Blackmail and extortion are crimes, and it is their obligation to enforce the law, not yours.

Do not comply with their demands. This can lead only to more extortion.

Follow the directions of law enforcement, even if those directions seem like a bad idea at first. They know what they are doing, and you should trust them to do their job.

It Starts With Email

With technology growing so rapidly, it was only a matter of time when scammers and low-life scumbags would take advantage of it.

The most popular one is sending spam emails to a massive amount of people with the message that they have been hacked, and if they don’t get money something will happen.

When it comes to such scams, it usually means threatening to publicly humiliate victim if the same doesn’t pay. One of such I have experienced as well.

Here is the message I got: 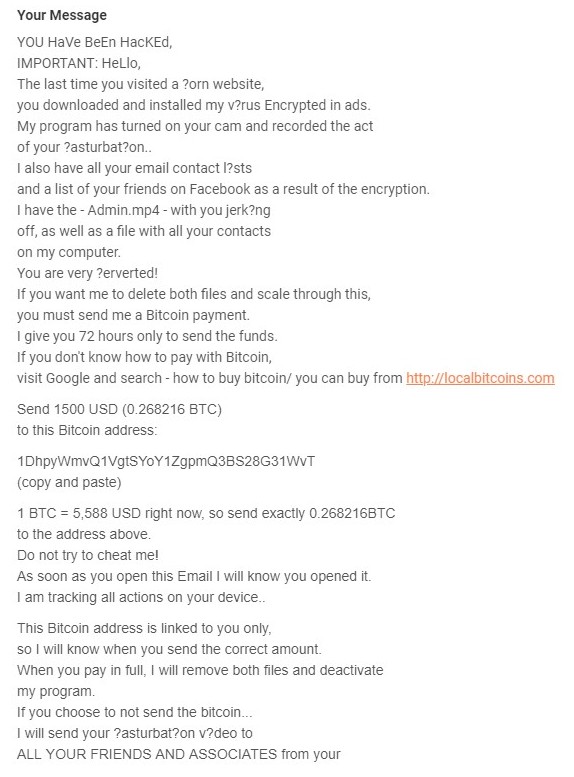 If you have encounter something similar, let me say this right away: THIS IS FAKE, A SCAM! Do not fall for that!

I will show you step by step to see why can I say with certainty this is a scam.

Did you notice the strange letters in this mail? Question mark replacing some of the letters? And “YOU HaVe BeEn HacKEd” in the beginning?

This is made to be ensured that their message is delivered to the victim and not be detected by spam filters from the mail host — clever way to bypass email filter.

That was the first sign that something fishy is going on. If someone has really infected your computer with a virus, he wouldn’t be using mail to contact you.

A pop up on your computer would come, regardless of your internet connection at that moment. Once your computer is actually infected with a virus, the internet doesn’t play any role in activating it.

This is a common way of a mocking, especially to authorities when it comes to hacking.

It is supposed to be read in a mocking voice if it is directed socially.

Something similar is known as l33t. L33t drew its roots from the early 1980s when hackers didn’t want their websites to be picked up in a simple keyword search, so they began using numbers to replace individual letters, such as A=4 or E=3.

With internet evolving, particularly in online gaming, “smack” talk become popular, and a phrase such as “I am elite” became commonly used to express players domination in the game.

Somewhere along the line, l33t speak crawled in, reforming the phrase into 1 4m 3l1t3 (I am elite) to demonstrate that the speaker was hacker, someone powerful and to be feared.

It was further exaggerated by deliberate bad spelling and eventually wrapped up as something like this: 1 4m 3l33t! and simplified to 1 4m l33t. Hence, the name l33t speak.

Let’s investigate the sender. This can be done quite quickly, and with little effort, you can find out several details about the sender.

How to check the details of a person who sends you an email? Simply click on a small triangle under the sender name and you will get information like this:

I censored my private email and left only relevant information about our abuser.

The first thing to check is his email. Copy his email: mayewiyotu@businessagent.email, and paste it into Google and any relevant search result will pop up.

In this case, this email is related to lots of reports from other people. Let me show you some of them. 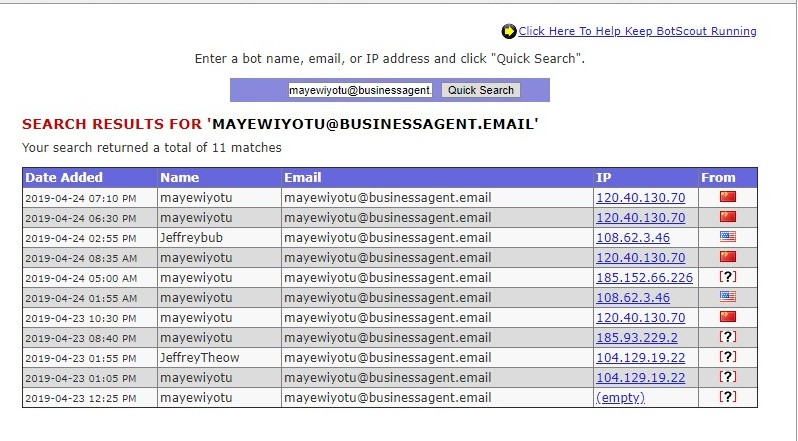 The first picture shows several IP addresses related, and in Google one stands out: 108.62.3.46

So I investigate it a bit further, and the results were as expected. 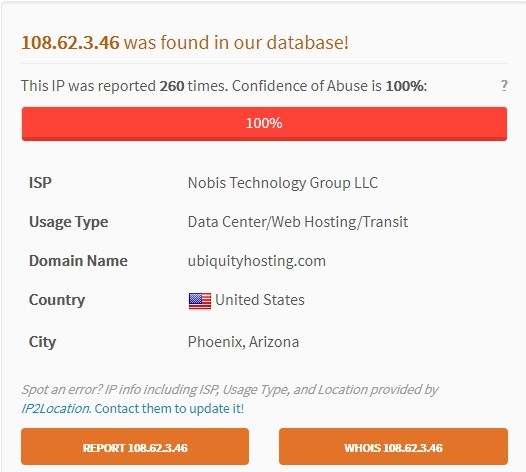 Already you can see clearly how this is a scam trying to pull money out of you. A smart part from his side what he did is to ask that transaction is to be made with Bitcoins.

Since Bitcoin transaction are not linked to a person or identity, it is hard to trace it. Even though it is not entirely anonymous, there are several ways to hide your identity, making it almost impossible to trace the recipient.

And since bitcoin transaction cannot be reversed once it has been included in a chain block, chances of getting your money back are none.

Still, BitcoinAbuse has made his wallet publicly blacklisted. 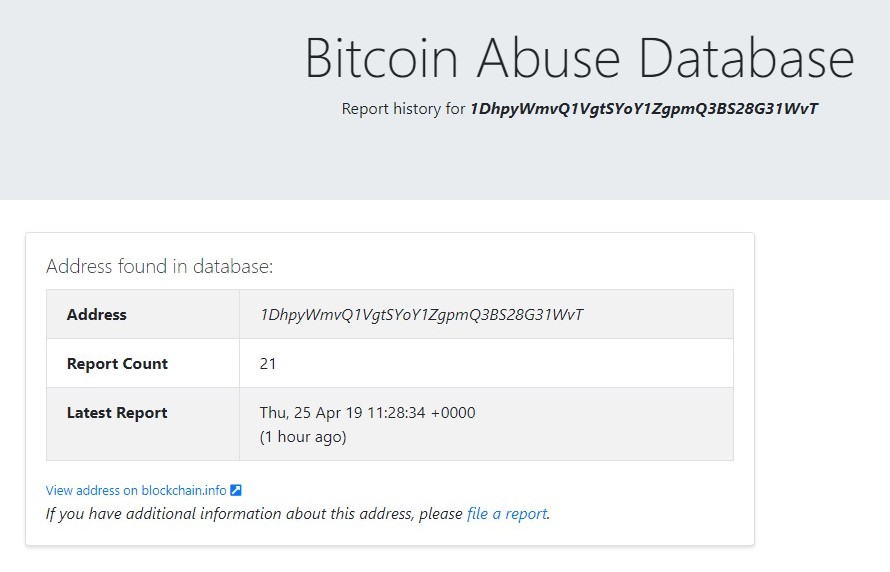 And again with 21 report counts, there is no doubt this is a scam, nothing more. Here are some of the reports: 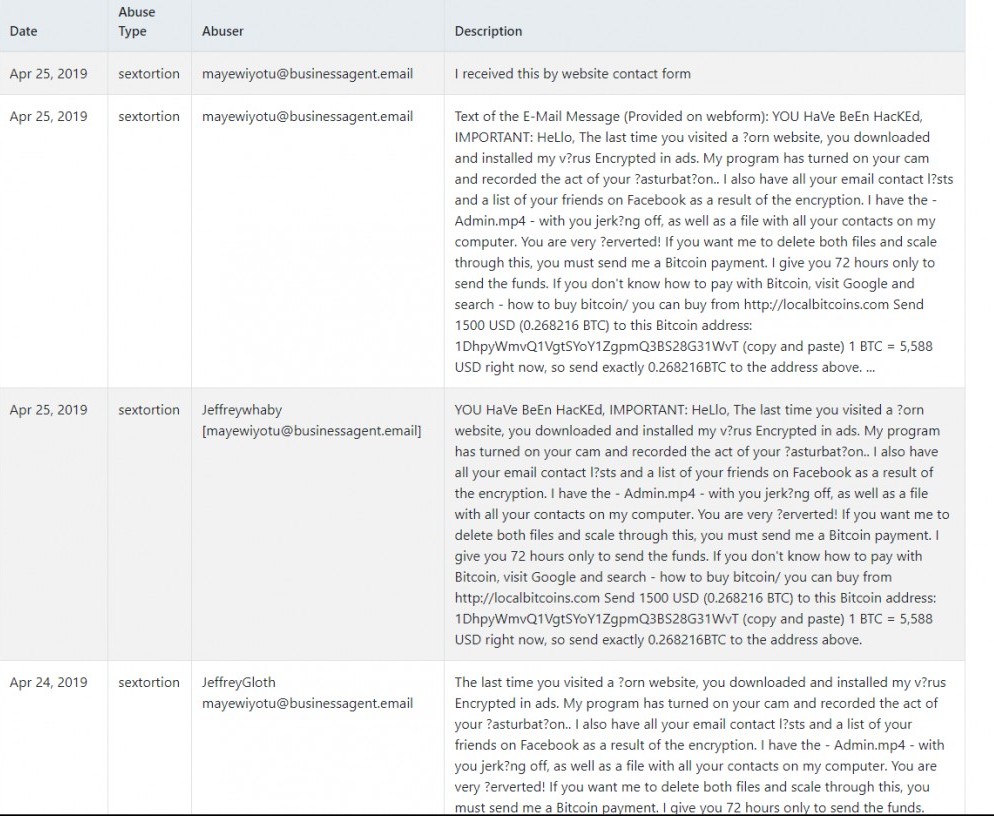 There is no reason why you should fear this type of scam. No matter do you have a webcam or what you watch in your own time, most likely, if you receive this kind of email, it is a bluff, trying to cheat you.

More details about what can you do if you are a victim of extortion can be found here.

More useful tips on how to deal with blackmail can be found here.

Alternatively, you can file a complaint to the DEA Diversion Control.

Have you ever encounter something like this? If yes, write down how you dealt with it. If no, I would love to hear what would you do in such a situation.

If you think I missed something, or you would like me to write about a specific topic, please write in the comment, and I will get back to you.

Until the next time.

Hey there and welcome! My name is Dalibor and I have started this site to help you avoid online scams. All they want is your money, and I can not hate more fact that they are ready for anything to pursue you to give them your hard earned money! My aim here is to help you not to fall for that and teach you how really you can make money online.
PrevPreviousWhat Is SEO Optimization
NextHow To Manage Money In College – And BeforeNext

4 thoughts on “Bitcoin Abuse – You Have Been Hacked”